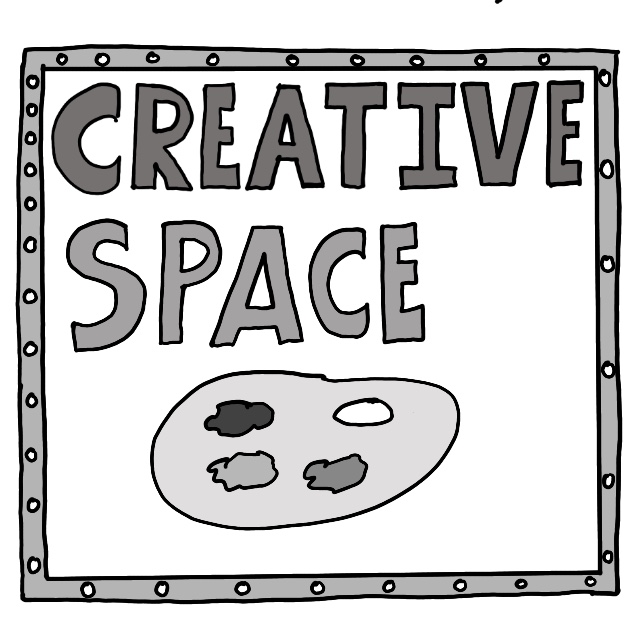 As one can see from the photo I have a very small space for creating my things. The table I guess is the centre piece., if that can be used in this context. It is an old folding card table that belonged to my grandmother, for when she played bridge. Now that’s a thing of the past and I’m not really sure anyone plays it any more. It has a lot of sentimental history to it and I hadn’t really thought about that I had been using it before now. The there is the center of operations, the iPad and Pencil. As I have said previously it was this that got me really started on doing my doodling. Also the realisation that I enjoyed creating things.

Its’s not the traditional studio that my parents would have thought of as one. And at the moment I don’t have all the tools and toys that I equate being in an artists studio. But at the moment I do have t tools of my particular part of this world and in some ways really simplifies my footprint. Now thats not to say that I won’t expand out but for the moment having a limited space will be good. I have natural expansionist tendencies and forever be think about the next bit thing and the resultant tools and paraphernalia.

At the moment my computer takes up a big chuck of the real estate but I have a plan to relocate it and therefore give me more room. Although I am very attached to the folding table it is wobbly and also a tad to tap for me when sitting at it for longer periods of time. This then leads me to thoughts of making my own desk space that would be more suitable. Somewhere I can store tools and supplies etc. Thats a whole other project though and not particularly artistic.

I also have a load of paintings and pictures that I want to get up, that have been hidden away for far too long. Having lived a rather nomadic life I never really got round to putting them up and enjoying them. Having visual prompts around I think is a good thing and I remember my father’s studio being literally wall to wall pictures, old metal signs and posters that he had gotten through fair means or foul. But I always felt like it sparked off ideas when I went in there. I also feel that the person that created the image wants that to be seen and enjoyed. But I could be wrong.

I do feel that having even just a corner to create in is what makes me want to sit down and do something is important. There’s loads of stuff out there on the internet about creating spaces for certain things. Where delineation is the key it helps me focus. as I have a bit of an attention problem. But the table is just not large enough. I need a good two feet extra on one end and I also need draw space to keep things in. So watch this space for more info as and when I am able to create this new workspace.

I also want to have space to do some physical arts and although I guess I could do it where I am it would would be very constrained. But only having a small space helps me think about the types of projects I can take on. I guess most people just fall into using a space, maybe a kitchen table, or a space in a spare room, or the really space challenged of us a slice of a desktop. But a few might have the luxury of having a room too spread out in. Planning out for me is also a creative process and I love noodling around. From doodle to dimensioned plan, it’s all creating an image that can describe what I want.

So to give an idea…

Thanks for getting this far, and until next time…